A Dog’s Bark: How To Understand Their Vocal Communication 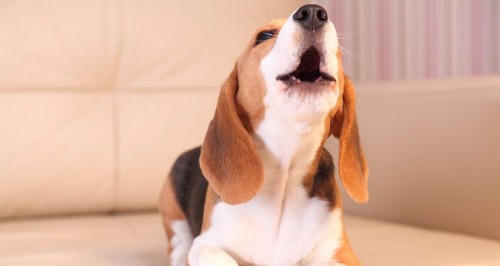 Is your dog barking because they have a legitimate need that’s not getting met or are they barking for no good reason? Dogs bark to alert, they bark out of frustration and sometimes  they bark out of excitement.  Often, a dog barks to either make a demand or some kind of request. So how do you distinguish your own dogs bark? Here are a few scenarios to give examples of common types of barking.

An owner places her dog outside for a potty break and closes the door to go do some dishes.  The dog immediately turns around at the back door and barks a rhythmic succession of medium to low tone barks. The longer she is left outside the louder the bark until true to her nature the owner relents and lets her back in. This is an example of a dog making a demand.

Single owner is just getting back from an 8 hour shift and begins to unlock the door to his apartment. He can hear his dog quick stepping and letting out an occasional high pitch wine. Every weekday at this hour it is the same scene. He opens the front door to a jumping, panting  dog and within three seconds of entering his home the dog begins to bark. This bark is more sporadic 2 or 3 in a row and a little high pitched. This could be interpreted as a demand, as well, except the barking doesn't stop even when the leash is on and they are out of the  building. If it takes his dog between 3 to 5 minutes to stop barking this is a bark triggered by high excitement.

Family has a crate trained 9 month old golden retriever. Every morning at 7 am she barks a  round howl-like bark every 30 second with some whimpering in between. As soon as she is let out of the crate she runs to the back door. Once let outside she runs to the same spot and squats to pee. This is an example of a requesting bark.

A teenager decided to try to teach his dog some commands so he went and chopped up some deli meat and called his dog over. He showed his dog the meat and said sit. The dog sat so he gave him a reward and said good boy. Next, he said "spin” and lifted the meat above the dogs head. After staring at the meat while in a sit for a few seconds the dog tried jumping at it. “NO!” said the boy. "Spin!” The dog remained seated but this time he didn't get any meat. While  staring at the boy, he lets out a single medium tone bark. This is an example of a bark triggered by frustration.

If your dog barks excessively and you would like an off button installed give us a call.